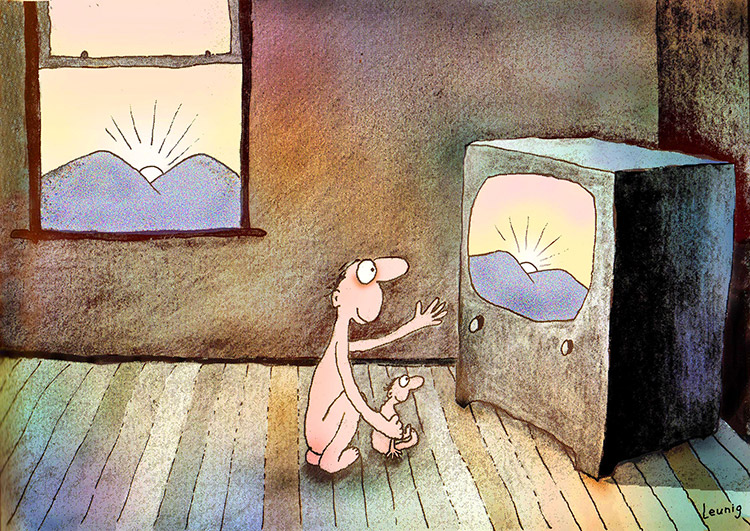 Aiming to stir the possum, I got engulfed in free-floating hate

It was exactly 50 years ago that I started working as a full-time newspaper cartoonist, and as if to celebrate this anniversary, mysterious fate had me drawing a cartoon which brought so much hostile public reaction that I began to lie awake at night wondering why I had followed such a troubled, painful and precarious career path.

In the offending cartoon I drew a mother with her eyes glued to a phone and wheeling a pram from which her baby had fallen completely unnoticed. The child lies abandoned on the footpath behind mother, wishing that he was as interesting as her phone. Black humour indeed but making a worthy point about the perils and disasters of the phone addiction which is spreading across the world like a plague.

A newspaper cartoonist can be something of a natural anthropologist; a keen observer of society with a sense of impending cultural change and its possible tragedies. Like many others I had been noticing with sadness the growing number of parents lost in their phone screens while wheeling babies in prams through busy streets. Heaven only knows what goes on in the home. Negligence caused by distraction is the issue. The roads are becoming deadlier because of it, and God only knows what other failures and disasters are being caused by phone addiction.

I drew a mother not out of misogyny but because of my lifelong special interest in the mother-infant relationship and all that is at stake in that early connection. For many years I have pored over the marvellous works of Donald Winnicott, the great English paediatrician and psychoanalyst, who gave us the idea of the "good enough mother" and identified and described in much detail what he called the "primary maternal preoccupation". This refers to the natural deeply attuned attention that in most cases a mother gives to the baby which has just emerged from her womb - and all the vital developmental facilitation that is set up in the child through this deep connection at the start of life.

To paraphrase Winnicott: the attentive loving eye contact made by mother with the baby is crucial in the child’s developmental process. It is this sustained meeting of eyes between mother and infant which activates the development of the baby’s sense of a secure self. The baby needs to be seen; it needs to be held in the mother’s gaze as well as the mother’s arms. What the father can do best at this point is to protect and nourish the flourishing of this early mother-child connection.

All of my life I have been fascinated by the talk of mothers, grandmothers, aunties, sisters, spouses and offspring about this ancient business of mothering, where we all began. In ordinary homes and around kitchen tables I was witness to a lot of this passionate conversation about the best way to care for a baby and raise a child. It is one of the great eternally interesting topics for discussion, and what is at stake makes it more important than most political debates could ever be. I listened and took it in. A real misogynist would not respect these maternal matters so devoutly.

Just as we are disturbed to hear tales that certain migratory birds are mysteriously losing their ability to navigate due to human environmental damage, so too might we feel concern if growing numbers of human mothers seem to be losing or devaluing this primary maternal preoccupation in favour of the banal hypnotic charms of a phone screen. Nature would seem to be in trouble when this starts to happen.

To make a conscientious cartoon based upon all of this concern and then be so hated, insulted, slandered in the public domain for this - as I was - is indeed a dismal fate for the lone cartoonist. It speaks volumes about the current condition of civil society and tolerance. This is bigotry. The malice has been astounding and so extreme that it has plunged me into a deep contemplation about the nature of angry hatred. Indeed, I am coming to the view that there is an emerging new form of hatred in society which might be more of a mental illness than a passing emotion. Perhaps I would call it "free-floating, obsessive compulsive hatred".

In looking at my part in this upset, I have wondered if it is my working-class background, with its raw language and earthy humour, that has caused an offending bluntness. This rawness has always informed the spirit of my work and humour, a spirit which for some may seem archaic and somehow inappropriate in the age of woke identity politics.

I learned in the streets of Footscray that a little dark humour can shed plenty of light. There was a lot of life and death in the slaughterhouses where I worked as a labourer before my career as an artist began, and this promotes a lot of philosophy and wonder. The cartooning sensibility that develops in such places may seem at odds with the more clean educated environment of these anxious and brittle times but remarkably, although my bloodstained workmates were fairly rough and ready, I never saw in them the same sadistic anger that has been dished out to me in words by my educated critics during my time as a cartoonist. As a friend said to me recently, "remember the good old days when you had to call someone a stupid bastard to cause offence – now if you just point out the bleeding obvious you can be denounced, hated, insulted, condemned and punished".

I have noticed that people can react to a cartoon as if it is a piece of legislation, an essay, a legal document or a scientific paper - but obviously it is none of these things. A cartoon is a simple allegory, a fable or a parable. It is better understood poetically than literally. And it is also a Rorschach test, often revealing something about the character of the beholder in their expressed interpretations.

I heard of an academic denouncing my mother-and-pram cartoon by saying that I had failed to take this thing and that thing into account. On and on she went, pointing out the failures of the cartoon and demolishing it and me.

But did the academic consider that I may have taken all those missing things into account but chosen not to spoil the plain and simple truth of the cartoon by including so much messy detail? Unlike the academic, the artist happily leaves many things to the common sense imagination.

But let’s face it, a good editorial cartoon stirs the possum. It is meant to. No offence is intended but with humans being what they are, offence is inevitable. Humans are anxious creatures and you can’t please them all. Anxiety can produce anger. Anger may lead to hatred. Hatred gives energy, meaning and purpose to insecure lives and is a free pass to the gratification of unrestrained malice. Once it becomes collective, the malice becomes its own monster. Then it starts to hurt.

Yet in all of this kerfuffle and madness the messages of support come in steadily, from men and women equally and from all over Australia, intelligent words that reinforce my observations on this matter of mother, baby and phone, and reassure me that sanity and decency go on quietly in the background. Yes, the newspaper cartoonist must always hear criticism and always examine their conscience but the first allegiance must not be to sentimental notions of motherhood but to raw truth.

And when all is said and done if just one parent, one driver, one worker in a dangerous environment takes stock and wakes up and gets their phone addiction under control as a result of this controversy, then all these bruises and sleepless nights will not have been in vain.