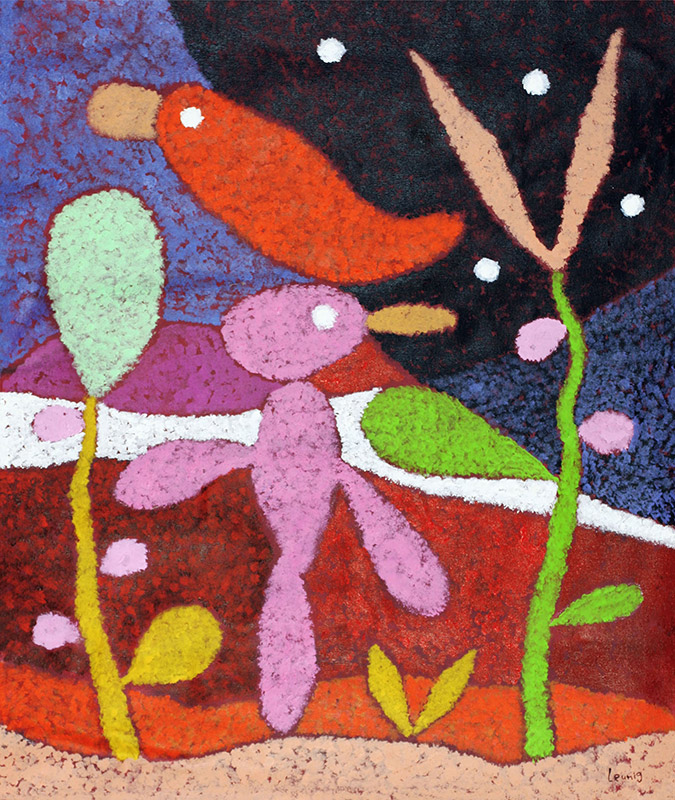 MOON ECLIPSED BY A MEMORY

The alarm went off at midnight, and up I got to observe the much publicised blue blood-red super-moon. Like many anticipated natural or unnatural events the media fusses about, I found it rather ordinary and really not worth getting out of bed for. Actually it was quite disappointing. An ambulance siren wailed somewhere in the night and angry motorbikes were heard, but the moon, although impressive as a normal full moon, was otherwise fairly unremarkable. I have stared at many full moons and enjoyed them all, but I felt strangely sorry about this one for having had so much expectation projected onto it.

Barefooted and a bit forlorn on the footpath, I mused about the strain and disappointment of urban life, then turned and headed inside, conscious of the stale city air and the rancorous state of the world.

I was in mid-hallway when suddenly, from out of the darkness a vivid memory came to mind; a vision so powerful that for a childlike moment I fancied the moon had cast a spell on me – for there, surging within, a radiant vision leapt into life and took possession of me.

Startled, I sat on my bed and gave over to it; this sensuous beautiful memory of a full solar eclipse I had witnessed forty years ago in the mid 1970’s; indeed an astounding and radical experience back then, which had filled me with rapture - the traces of which will probably remain in my blood forever. I had seen nothing remotely like this, and it was indeed the vision splendid.

So there I sat on my bed, savouring this glowing memory as if it were an epiphany, for it seemed to be an auspicious reminder of another, more wonderful, healthy and mystical world.

At the time preceding this event in 1976, I did not know what to expect as I sat waiting, wide eyed and open minded on a peaceful hillside overlooking a timbered green valley in rural Victoria. Media hype was not as flagrant or desperate in those days.

As the special moment approached, the clear sky quite suddenly and gently started to become a soft purple colour, and very gracefully this grew richer and deeper before my widening eyes. Cows near and far began to bellow in strange tones and soon enough, from out of the surrounding countryside, a great chorus of animal and bird sounds lifted into the air and filled the heavens – for at that moment, like never before in my life, there was a primal feeling of grandeur and the strong sense of an ancient, all-powerful heaven above.

This strange cosmic drama was developing at a steady pace; strongly enough to be dramatic, gently enough to marvel at, and so vast as to be humbling. The hairs on my arms stood on end and birds in great numbers began to hurtle low over the ground in urgent unswerving flight paths. The darkening sky grew ever more rich and glorious – a full deep purple, the likes of which I had never seen – and the air in the valley became still, as if the land was holding its breath.

And then... the bees! From out of nowhere, and from everywhere, bees began zooming across the hillside; astonishing streams of bees following the contours of the darkening land this way and that, lines of speeding bees criss-crossing and whizzing in tight formations along narrow flight paths – huge dense ribbons of bees all heading to distant hives in humming buzzing beelines of enormous urgency and purpose.

Intoxicated with wonderment I was being swept up in a spectacular eerie miracle of the planets – and thus, I now imagine, immunised for life against the banality and meanness of human culture that lay ahead. Once you have experienced such cosmic euphoria you may indeed become liberated by it, enough to see human grandiosity from a different perspective forever. No human contrivance or orchestrated event, no architecture or technological achievement can compare; the material project of human endeavor seems more puny, vain and delusional. Meanwhile the purple sky continued to darken and soon became so enormous that it seemed like it was devouring the earth. And then, quite perfectly and gracefully, everything went suddenly black, and the world fell silent. Was this, as I had heard in childhood ‘the peace of God which passeth all understanding’?

I climbed into bed and lay there savouring the richness and sensuality of this memory. I mused. Why had this vision come to me so elaborately and brightly just then, at that moment of disappointment and banality – and why was I so deeply moved and astounded? Had the sight of the disappointing full moon been a blessing in disguise?

Happily mystified, I drifted into a state of gratitude for what had happened, I thanked the moon, and before too long was sleeping very peacefully.

I don’t watch movies any more and find that reality is entertainment or enlightenment enough. I know nothing much about all the films and movie stars that are talked about. I feel blessed. In the manic modern world, not-having can be more nourishing than having. Energising personal visions soon replace addiction to electronic screens. It is wise to live in the reality of the present but there is also joy and wisdom in the fertile memories or visions that sooner or later rise up from within.

My moon-inspired vision of a lovelier, more wondrous time perhaps awakened a new and much needed energy in my life. This possibility reminds me of a vital natural law about spiritual life and creativity that I have long found to be true. It’s as simple as this: disillusionment precedes creativity. When disappointment, melancholy or despair take hold, when a sense of futility drags you down, have faith and know that creativity and a bright vision may soon be born. At that point the life force could be getting ready to grow.