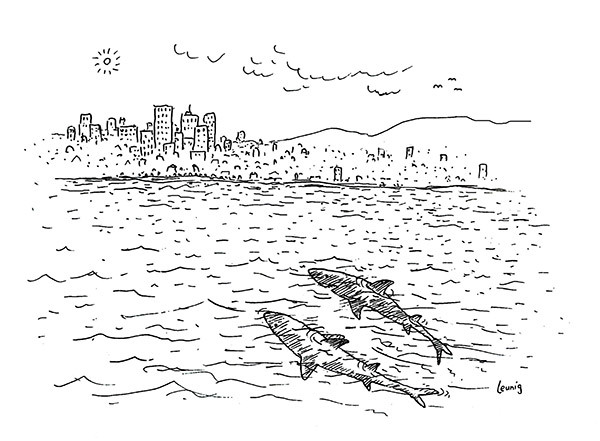 NOTES FROM THE MOSH PIT

Sharks have been approaching the beaches this summer and causing much excitement.  No doubt they have come to peer from a safe distance at the humans who clamour to the crowded coastal resorts for rest and recreation. From their offshore vantage points, the sharks drift about and look on in wonder, discussing between themselves the amazing antics of the stressed holidaymakers on the shore, who struggle to find food, parking spots and a place on the crowded sand where they may sunburn, look at their phones and listen to the noisy jet skis.

The holidaymakers had no sooner collapsed from the ravishes of a manic year and suffered the frenzy of Christmas than they were hurtling headlong in a stampede to the overcrowded coast. Spurred on by throbbing car radios and faded childhood dreams, they were escaping to a whole new array of worries, expenses and unexpected vexations.

The sharks observe that the humans consume large amounts of alcohol, coffee and sugary drinks which appear to intensify the frenetic pace of the tourist hurly-burly. Paradoxically, the humans seem to exhaust themselves in pursuit of relaxation and make a lot of noise in their search for peace. The sound of cars and motorbikes never stops. The human swarm seems muddled and weary. The smell of cooking fat drifts along the esplanade as people lick ice creams and stare at the tips of their own noses.

The sharks talk amongst themselves. “These humans… look at them, they’re mad, they’re dangerous. They’re shark eaters. Be careful, they’re deadly, they’re killers. They even kill each other! Their eyes have a staring expression; they are always seeking something. What are they seeking? They always want something; they are always uneasy and restless…”

At this point a helicopter appears overhead, a siren begins to wail and a high-powered boat roars like an angry monster and drives the sharks out to sea.

The silly season lasts longer each year, and perhaps the point has been reached where we fear it will go on forever. A little silliness can be fun but too much of it robs life of meaning. Culture becomes incoherent and silliness turns into awfulness. We see it in things small and large. No sooner does Christmas end than Easter eggs and hot cross buns are on the shelves in the supermarket. Meaning is insulted, a lie is imposed, and yet another little trauma is inflicted upon culture and consciousness. Madness creeps stupidly and steadily forward.

The decline of collective sanity is seen first in little violations of the small graces belonging to common decency and everyday life. Another tiny canary dies in a coal mine. All too easily the loss of meaning brings disregard and delusion. Then suddenly an obnoxious man is elected as leader of he world’s most powerful nation. Life no longer imitates art (if only that were true), now it imitates bad television.

It is interesting and remarkable, that as much of the Western world is becoming worried about border security, the boundaries between fantasy and reality are collapsing. In the public realm, the border between truth and lies has broken down considerably, creating a popular culture of deceit and self-deception. Some of the worst lies are the lies you tell to yourself. The decades of bad film and television are taking their toll. A comeuppance is at hand.

From the land of the obnoxious man, the hypnotic power of the moving image has mesmerised the world. It has thrived on crude projections of depravity, death and broken taboos, and burned them into the psyche of modern man. There, they resonate and fester, and in unstable circumstances of an unwell mind, may become demonic behavioural options that demand life, action and realisation in the world. The psychotic rampage of the deranged individual in some way arises from the madness of a deranged culture or the rampage of an obnoxious national leader.

The obnoxious man is inaugurated and speaks obnoxiously of the American dream. Corn, cliché and conceit roll forth and a presidential fist is raised in a type of modern fascist salute. It is a menacing and repugnant gesture but also strangely unconvincing, and somehow a bit like his ridiculous failed dancing at the inaugural ball. What he is talking about is not the American dream but the American delusion. All nations have them. Every culture has its unique brilliance and its unique stupidity.

How could an obnoxious man be elected as president? You might as well ask how an atomic bomb was dropped on Hiroshima, or how and why such atrocity and devastation were inflicted upon Vietnam and Iraq. You could ask about all the American guns and gun murders and mass shootings, or the sad horror of 9/11… and what happened to the indigenous people in this land so allegedly blessed by God? Surely it is no surprise that such a man could become the president in such a land.

In 1924, the Swiss psychologist Carl Jung visited America and there he met a Pueblo Indian elder, Ochwiay Bianco who told him about the indigenous people’s impressions relating to early encounters with white men:

“See how cruel the whites look. Their lips are thin, their noses sharp, their faces furrowed and distorted by folds. Their eyes have a staring expression; they are always seeking something. What are they seeking? The whites always want something; they are always uneasy and restless. We do not know what they want. We do not understand them. We think they are mad.”

Thus the archetypal obnoxious white man was described and Jung suddenly saw the aggressive imperial nature of European culture in a sobering and sorry new light.

Yet under all those fine uniforms, gowns and heavy overcoats at the inauguration there were naked humans – and there in this vulnerable nakedness is found a truth that created great literature and music in America; from Samuel Barber’s poignant ‘Adagio of Strings’ to the mystical poetry of Bob Dylan and the sublime humble paintings of Grandma Moses depicting human innocence, nature’s beauty and the grace of social harmony.  Wealthy powerful nations are capable of anything.

And so the silly season rolled on. From a popular music festival along the coast came news of inappropriate touching in the mosh pit. Regrettable and shameful, but really no surprise. Life itself has become too much a mosh pit. Politics, war, marriage, family commerce, entertainment and summer holidays by the sea. All mosh pits more or less. The obnoxious man made a specialty of inappropriate touching and appeared to win votes for it. The inappropriate touching of special concern is when this mad dreadful man might be tempted to touch the red button and blow us all to pieces.